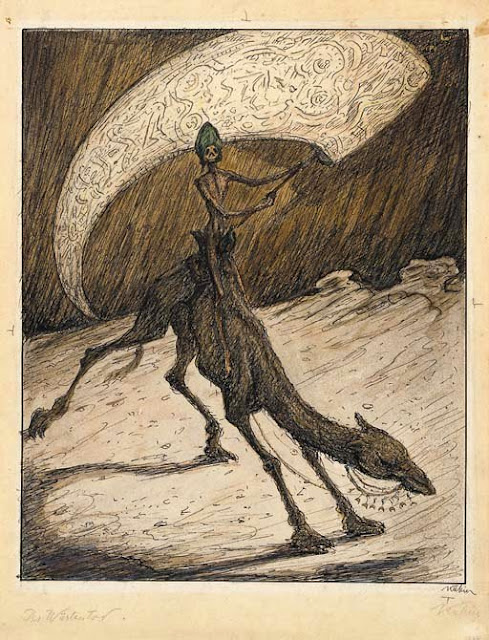 This striking and richly coloured work depicts one of Kubin's favourite themes - the figure of Death - riding a camel and carrying a huge scythe-like banner. The image of Death on a camel almost certainly derives from an ancient Arab superstition which declares that he who dreams of the image of a man on a camel in the desert is fated to die shortly afterwards. For Kubin, a self-declared "fatalist," this story evidently struck a chord. In addition to his many varied depictions of the figure of Death in the more familiar Western European tradition of carrying a scythe and riding either a horse or a fiersome creature from the depths of hell, there are several examples in his oeuvre where Death is rendered riding a camel.
Entitled Der Wüstentod ("Desert-Death") this particular version is one of the most fully-worked and atmospheric of these drawings and is clearly intended as a pictorial manifestation of this ancient superstition. Emerging from the dark horizon waving an elaborately decorated banner that sweeps across the night-time sky in the shape of a scythe, this figure of Death appears wearing a green turban and sitting astride a haggard-looking creature while staring straight at the viewer. With its bleak landscape and long sinister shadows all exquisitely rendered in rich brown colours and sharp ink line, this magnificent product of Kubin's ever-fertile creative imagination, encapsulates in a single and seemingly archetypal image, the haunting resonance of a nightmare. 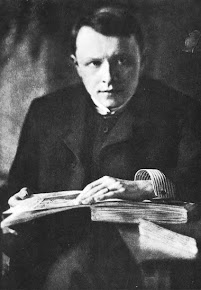