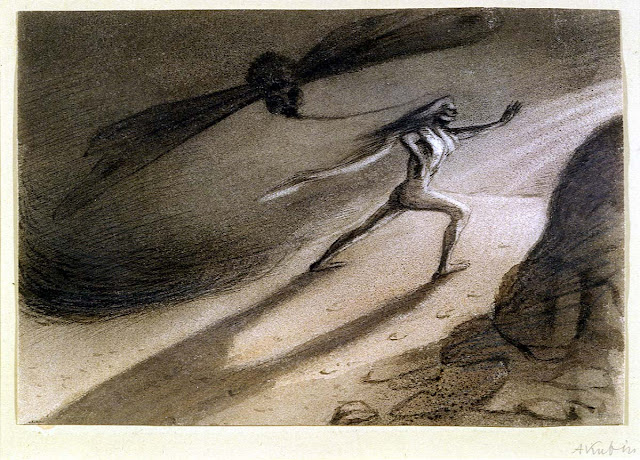 "Kubin's artistic output explored basic human impulses—desire, fear, death, destruction, and also fantasy. His enigmatic drawings belie an unusual sense of humor and a taste for perversion. Kubin's work from around 1903 entitled Man in a Storm evokes a nightmare. A huge, bee-like insect with a giant stinger swoops down on a nude, male figure, whose own shadow is transformed into a ghostly doppelgänger. The man strides toward a luminous source of light. His long hair streams behind him, yet his feet appear rooted to the ground. The diagonal thrust of the composition increases the sense of urgency and directs attention toward a possible passage of escape. As a child, Kubin suffered a series of traumas, including the premature death of his mother and the loss of his first fiancée, Emmy Bayer. This work is believed to have been completed around the time that Emmy Bayer was sick and dying of typhus."
Review written by Janis Staggs, for "Curator’s Choice" in Neue Galerie New York
Follow her on Twitter @Curator_NGNY.